Urban Queeriosity is not only an art exhibit, but also a collaboration with other artists.

Urban Queeriosity is a show witch content evolves around the Queer society in Copenhagen & it's more normative Citizens. Lonely Planet states that Copenhagen in 2014 is the most gay friendly place on the entire earth. The Economist Richard Florida, already stated in 2003, that the best conditions for Growth in a society, is the presence of: Talent, Technology & Tolerance.

Queer really covers everything that sistance itself from the norm, Queeriosity is not a Word, but a mix between queer & curiosity, so it is June Jin's own Word to express her own curiosity towards the queer society.

The artists June Jin & Kasper købke, began working on this show in 2011. Kasper Købke draws large scale pencil drawings & June Jin Works with oil paint. They both wanted to combine these materials... so they did. June Jin has done research in the queer society in Copenhagen, for aproximately 6 years, she invited 2 Performanvce Artists to join the show. Miss Fish performed at the Vernissage and The Gentleman in the middle of the exhibit periode. 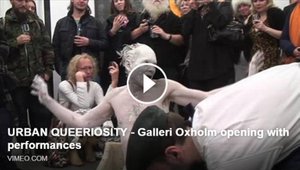